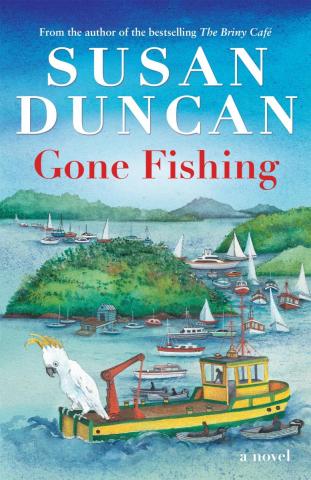 Gone Fishing is the new novel by bestselling Australian author Susan Duncan. This is a heart-warming, inspirational story about taking a stand against all the odds. Gone Fishing follows the must-read novel (which I adored!) The Briny Cafe.

Susan Duncan enjoyed a 25-year career spanning radio, newspaper and magazine journalism, including editing two of Australia's top selling women's magazines, The Australian Women's Weekly and New Idea. She now lives in her own patch of offshore paradise, Pittwater, with her second husband, Bob, in the beautiful home built in 1925 for poet Dorothea Mackellar.

Leave a comment here for your chance to get a Christmas Card direct from Susan, or maybe a free book from the giveaway pile.

Gone Fishing is about a community standing up for what it believes in. People are aware that if they don't they will lose everything that is most precious to them. Underlying the battle - or perhaps over-lying it - are the same characters from The Briny Cafe with their personal issues. Kate's looking for a brother she never knew she had and is in danger of letting the past dictate her future. Ettie is dealing with menopause and afraid that it might threaten the every day existence she loves passionately. Jimmy sees the world through innocent eyes and therefore so clearly he opens the hearts of even cynics. Sam, just turned 40, wonders what happened to the man he thought he'd become one day. Wonders how he went so off-track. Together, though, they show how to fight a battle against the Goliaths of the world…and win.

When my husband and I bought some farmland, we discovered Coal Seam Gas fracking was threatening a nearby rural area. I felt powerless. How do you fight big business, I wondered? So I researched three successful environmental battles: Currawong, Kelly's Bush and Trans Grid in the Manning Valley. The result is a 20-step plan to taking on the Goliaths gently woven through the narrative of Gone Fishing.

Funniest Christmas? Hmm. The loveliest was my first on Pittwater.. prawns off the end of the jetty, silly reindeer hats, a million roast potatoes and the Scotland Island dogs doing the rounds looking for treats. Then singing carols until our voices were hoarse. Lots of laughter. A few tears for absent friends and family. Feet cooling in water on the high tide.

We've never been big on gifts as a family but gloriously perfumed soap from my mother, twelve cakes of it, made bathing a scented luxury for a whole year. (Margareta: If you've ever had the pleasure of hearing Susan talk about her books, you'll know her mother and their hilarious mother - daughter relationship, features alot in her stories.)

Can't think of anything!

You'd have to ask the recipients.

Toby and Dave, who run the Laurel May on which the Mary Kay is based in Gone Fishing. They're great, generous-hearted blokes who always have time for a chat or a question about lighters and loads.

Having read GONE FISHING, I think you'll find this is a novel which will appeal to both genders of all ages, but particularly mum's and grandmothers. You will also find yourself looking up real estate advertisements for the Pittwater. The community and life there sounds very appealing to me!

I had the very great pleasure of spending three days with Susan earlier this year, and again an evening a few weeks ago. Such a strong, articulate, generous and all round very lovely lady. As a writer, I particularly adore the variety and breadth of the descriptive language in her novels. You can see the Pittwater. You can smell the Pittwater. You can feel what it's like living off-shore. It's not hard to see I am a huge fan of Susan's books.

Have had Gone Fishing on my To-Buy list for a while now. Am trying to ration books cos I have so many on my To-Read pile as it is but know I won't be able to resist for much longer!

After reading Bella's Run, and feeling the connection to my high country family, and then reading Hope's Road, and again, the feeling of connection to the Valley and the fracking issue, I can't wait to read Gone Fishing. Although, Pittwater, is a little? out of my league, I spent a lot of time working on the Hawkesbury River,catching the ferry to work, and would love to revisit, via Susan's descriptive narrative, the sights,sounds and feel of life on the water, as I know I am never disappointed in Susan's ability to transport her readers.

Looking forward to reading it!!

This sounds like a novel just for my mum! Especially the part about seeing, smelling and feeling like you're in Pittwater. Sounds lovely!

Hi Susan. I have all your

Hi Susan. I have all your books and have enjoyed them very much. I am looking forward to reading Gone Fishing.