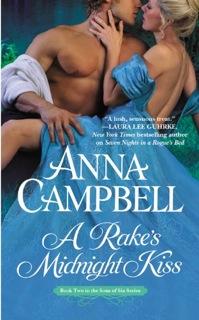 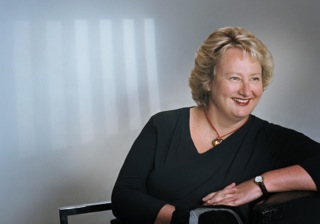 Anna Campbell would have to be one of my favourite historical romance authors. She has written seven multi award-winning historical romances for Grand Central Publishing and Avon HarperCollins and her work is published in twelve languages.

Anna has won a multitude of awards for her Regency-set romances including Romantic Times Reviewers Choice, the Booksellers Best, the Golden Quill (three times), the Heart of Excellence (twice), the Aspen Gold (twice) and the Australian Romance Readers Association's favorite historical romance (five times). Her books have twice been nominated for Romance Writers of America's prestigious RITA Award and three times for Australia's Romantic Book of the Year.

Anna lives on the beautiful east coast of Australia where she writes full-time. She joins me now in the Christmas is Coming series to answer a few questions.

Leave a comment here for your chance to get a Christmas Card direct from Anna, or maybe a free book from the giveaway pile. 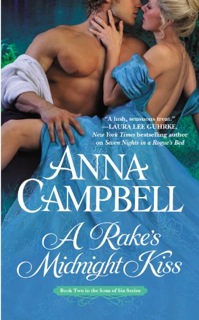 A RAKE’S MIDNIGHT KISS is a historical romance set in England during the Regency period. It’s the second book in Sons of Sin series which started with SEVEN NIGHTS IN A ROGUE’S BED. This story features Sir Richard Harmsworth, who is a bit of a Scarlet Pimpernel type, and scholarly Genevieve Barrett who has no time for rakes. I had great fun writing their dialogue – neither wants to give an inch, but you just know they’re falling head over heels in love with every snarky exchange. You can read the blurb and an excerpt here: http://annacampbell.info/rakeskiss.html

Usually I get an opening scene in my mind as the kicking off point for a story. With A RAKE’S MIDNIGHT KISS, what came first was the rake’s midnight kiss! A scene appeared in my brain with a very charming man and a girl taking a moonlit swim in a pond. It was perfectly clearly that while these two were prickly with each other, they were also irresistibly attracted. So who were they and what were they doing there? That’s where the rest of the story came from. I think it’s easier when I get an opening scene!

I’ve never had a white Christmas although I’ve always wanted one. The closest I got was spending Christmas in London in 1985 where I shared a very grotty flat with a couple of girls from Sydney. Sadly, it didn’t snow, but it was definitely cold. And Christmas dinner wasn’t quite as we’d planned. We’d decided to do all the trad trimmings and everybody had an assigned task. Sadly, one of the girls had never cooked a turkey before and didn’t know to check for the plastic bag of giblets inside. As the baking proceeded, a horrible melting chemical smell filled our flat – an improvement on the usual mildew, perhaps. By the time we worked out what had happened, the turkey was beyond saving. Sigh. Our trad Christmas lunch was trad if you were a vegetarian! I must say my roast potatoes came out rather well, though!

My parents gave me a little portable Imperial typewriter when I was in grade 11. I’d decided I wanted to be a writer and this seemed like something that would help me to achieve my dreams. LOVED that typewriter!

My parents gave me a set of bathroom scales one year and were surprised when I was underwhelmed. Clearly the parents giveth and the parents ought to taketh away!

Not sure it’s the best Christmas present but it’s definitely one I coveted. I bought my critique partner, Annie West, a gorgeous silk scarf from the Library of Congress in Washington D.C. featuring characters from Shakespeare. How writerly can you get?

The romantic in your family!

When Anna sent me this photo of 'the real Anna Campbell', all I wanted to know was where I could get a piano like that one in the background. Isn't it gorgeous! Just like Anna herself. If you haven't tried reading an historical romance, you couldn't start with a better author than this.

Anna has very kindly offered to giveaway a copy of A RAKE'S MIDNIGHT KISS, so make a comment below and go in the draw to win a copy of her latest novel or a Christmas card from Anna herself.

That is a lovely piano. What

That is a lovely piano. What a terrific place for a picture with a glass of champagne?
Oh and lots of people do that. Cook the turkey that way. I never figured out why they do that? Why do they put that bag back inside the turkey?? What a stupid idea.

Lisa, I agree, it's pretty silly. My poor friend had a lot of disasters like that, though. I remember a Marks and Spencers quiche that had heating instructions of place in oven and heat. They didn't tell her to take it out of the plastic container first. More burnt plastic aroma around the flat!

LOL Ok, well, maybe it wasn't the stupid turkey peoples fault then. Just that one time. hahaha
This friend of yours, she doesn't cook for children, does she?

Poor girl, she hates that she's become a bit of an urban legend (like the time she asked my flatmate how to clean the bath because we'd portioned out chores and she'd never done it). Very Princess and the Pea! The good news is that she was a fast (ish) learner and she's managed to bring up two children to become lovely people.

I know I'd love the silk scarf that Anna bought :)

Warinda, I'D love that scarf I bought. I must get Annie to take a photo. It really is the most gorgeous thing.

May, I remember being SOOO excited when I found the scarf. You know sometimes you just find exactly the right thing for the right person? It's a great feeling.

About that turkey.... I have

About that turkey.... I have done the same thing as your friend. Needless to say, my wonderful husband takes care of the cooking. Oh I should have spent more time in the kitchen with my mom and grandmother.

Your books are fabulous and addicting so when buying an Anna Campbell book don't just buy one buy them all.

RRG, buy one, buy them all? You're DEFINITELY on the Christmas card list! Thank you so much. My poor friend, her exploits as a girl very unused to dealing for herself have become a bit of a local legend! I actually was a late developer with cooking too - my mum was very territorial in the kitchen and didn't want someone leaning over her shoulder stealing her secrets.

Like you, Anna, I've never had a white Christmas - or even a cold one, come to think of it. Although there was that one time it was cool and my father popped on a cardigan... And yet us silly Australians love making just as much fuss over a hot Christmas lunch as the people in the colder climates. Somehow it doesn't seem as festive without some of those wonderful, traditional trimmings. I love buying books as Christmas presents - and it goes without saying I love receiving them, too! The beauty is watching the gift recipients start reading, then politely join in with things, while their eyes stray back to the books as though they can't wait to continue reading. One Christmas my niece spent the afternoon stretched out on the floor devouring the novels I'd given her. Believe it or not she finished them both (she's a very fast reader), then turned to the front and started again, blissfully. She always does a terrifically fast first read then enjoys an immediate second slower read. And re-reads after that. Her books are very well loved. I hope all your books sell well this Christmas, Anna, and that all readers everywhere will at least have a few books tucked into their stockings.

Malvina, I think because the big meal is SO unseasonal, that's actually part of its charm. When else do we eat turkey and all the trimmings? In my family, NEVER! I love your story about your niece reading. I can remember being very quiet at Christmas thanks to a few wonderful book presents. Still think a book is a great present! Thanks for the good wishes for sales! x

I have read some books by Anna, but I guess I missed A RAKE'S MIDNIGHT KISS! I see Anna is getting in the festive mood with her glass of champagne! Thank you for this giveaway!

Nicole, I am rather partial to a bit of bubbly - and with a summer Christmas, it's the perfect time of year to indulge. Hope you enjoy Rake!

Kim, it's a strange mixture down here. A lot of Christmas cards and all the symbols have to do with winter but there's also lots of stuff about beaches and swimming and having a lovely time in the summer too. We get a lot of your TV movies that are all winter but most of our TV ads are based in summer. As I said, very mixed!

I love your books, Anna, and am looking forward to reading the next book in this series. Thanks for the giveaway chancE

Giveaway and next book

Maria, I just sent the next book in the series away to my editor. It's called WHAT A DUKE DARES and it's out next August. Good luck in the draw!

I would love to read your book!

Thanks for swinging by, Charlene, and good luck!

Bluestocking heroines are my

Bluestocking heroines are my favorite, especially when they run circles around the hero. Thanks for the chance to win!

I love them too, Julie! With this book, it was fun having a heroine who was keeping up with my hero's machinations. Kept him on his toes too!

Will you please be my Secret

Will you please be my Secret Santa? Love the sound of Annie West's scarf! And can't wait for the 'dude' to be dared next year! Love, love, loved your last rake!
And thank you for the Grosvenor Square novellas you and the other lovely ladies have written.

Susanne, lovely to see you here. And thanks so much for saying you enjoyed the free collection. We've had such a gorgeous reaction to that - we really must do it again. I loved writing that story - really let me be super romantic! Ha ha, the DUDE is looking forward to meeting you in August. And I must get a photo of Annie's scarf next time I'm down visiting her. It really is spectacular! And the fact that it came from the Library of Congress gift shop made it even more appropriate.